Konichiwa Yokohama
You are so good! Apart from raising almost €10,000 for LauraLynn (and the link is still open), your forecasting of the 2019 RWC so far has been exemplary. Hardly a negative score on the board, 52 of you with 50+ points after round one, this is going to be one tough battle!

Conor Molloy and Kieran Carrick are slugging it out in joint top position on 62 points (Weekend Award to be decided next week on countback), with ten separated by a drop goal or less.

Go to Leaderboard to find yourself, and to Forecasts to see what you predicted.

A great start for Ireland, who looked back to their old selves, and the threat of what is to come in the All Blacks v Boks match, who both looked very difficult to beat. 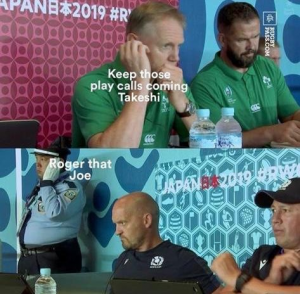 England snatched their bonus point at the end, which could be crucial in the Group of Death. Argentina now must front up against England in 2 weeks time if they are to get out of the group, and they and France need to pick up their bonus points along the way. If England slip up against either the Pumas, or in their last match against France, bonus points will decide it.

Wales’s big game is next weekend against the Aussies, whilst Ireland can more or less cement their QF if they beat Japan.